“We applaud the Governor’s leadership on this issue, and we stand with New Jersey in support of environmental justice for vulnerable communities overburdened with emissions from an abundance of sources, large and small,” commented Paul Gilman, Covanta’s chief sustainability officer. “For Covanta, environmental justice is more than a buzzword. It is about taking meaningful and measurable action to protect the communities we serve; after all, they are our communities too and are where our employees and their families live, work and play.”

Covanta’s commitment to environmental justice is rooted in its history. In 2011, this conviction was turned into action with the creation and implementation of its Community Outreach and Environmental Justice Policy. Nine years later the policy continues to guide the company’s interaction and engagement with communities around the world, including its investments in technology designed to dramatically reduce emissions from its operations.

In Newark, for example, despite already operating well within environmental standards, Covanta invested $90 million in state-of-the-art emissions control technology, or “baghouse” technology as it is referenced in the industry, resulting in further improvement in environmental performance and a reduction in emissions in excess of 90 percent.

“Today, our Newark facility consistently operates at environmental performance levels far better than those required by its permit, not because we have to, but because it is the right thing to do for our communities and our planet,” continued Gilman.

In Camden, home of another Covanta waste-to-energy facility, the company is developing plans to invest $40 million to $50 million on new state-of-the-art emissions controls as part of its public commitment to implement five improvement projects by 2023 focused on reducing emissions, specifically in environmental justice communities. Since acquiring the Camden facility in 2013, Covanta has invested more than $55 million in maintenance and capital expenditures to improve the facility’s operational and environmental performance. 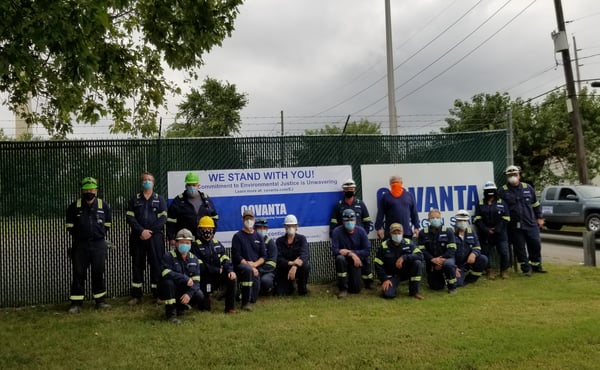 While some have been focused on depicting critical waste-to-energy infrastructure as part of the problem, in reality, according to data from U.S. EPA National Emissions Inventory WTE is a very small contributor of emissions in these communities.

“In order to achieve tangible improvement to the air quality in overburdened communities, we believe that all emissions, from all sources, must be considered and addressed, starting with the largest sources first as they represent the greatest opportunity for measurable improvement,” Gilman continued. “For example, it is well-known that Newark is home to one of the world’s busiest airports and some of the most congested highways in the country, in addition to an international shipping port and associated rail yards, all in close proximity and all contributing meaningfully to the local air shed. We call on all industry to take meaningful actions to address this imbalance. Alleviating the unfair burden placed on environmental justice communities is long overdue.”