Covanta Indianapolis recently received a flag flown over a U.S. military base in Saudi Arabia. Brian Foster, Environmental Manager at the facility, brought the flag back from his latest combat deployment with the National Guard. This is the third time he has presented a flag to the facility after returning from overseas.

“I appreciate the support I’ve had from the facility and corporate personnel that has made it so much easier to serve, knowing that your civilian job supports you like Covanta does.” Brian said. In the photo, Brian (right) presents the flag to Facility Manager Jeff Horn. 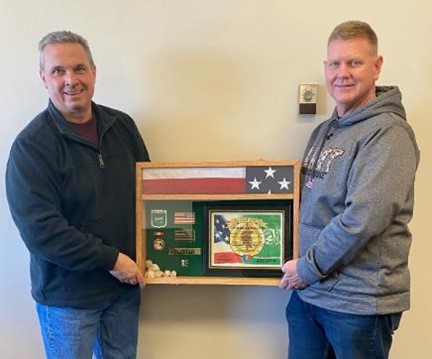