Covanta Camden partnered with the New Jersey Audubon Society to create a pollinator garden in an abandoned lot on Filmore Street. The lot, a former dumping ground, was cleaned up by Covanta Camden facility workers and maintained by Covanta for over a year while local Camden residents worked tirelessly to procure the required insurance on the lot.

The formal dedication ceremony took place on July 22 with Camden Council President Angel Fuentes, Councilwoman Shaneka Boucher, and Councilman Christopher Collins in attendance. Council President Angel Fuentes praised Covanta for their partnership, expressing the city’s gratitude on behalf of Mayor Victor Carstarphen, and commending Covanta for their high level of volunteerism throughout the city. Councilwoman Shaneka Boucher of the 1st ward, where the Garden is located, applauded Covanta for listening to the Camden community, and thanked Covanta for working alongside and investing in the City for the betterment of its residents.

The garden, now fully accessible to the Camden community, was named Porter’s Daughter’s Garden, after Portia Simmons, the Camden resident responsible for initially reaching out to Covanta to orchestrate the cleanup project. Covanta Camden employees will continue to donate resources and maintain the garden. 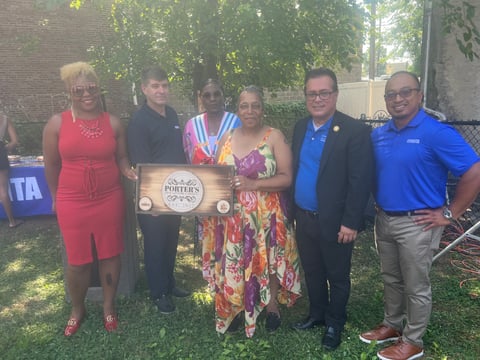